Recipes on the Internet for baking sourdough bread vary greatly but have one thing in common: They promise a short preparation process and add a multitude of ingredients to the dough. The end result is a bread that has little in common with old-style German sourdough bread.

The situation is not much better in Germany. The preparation process has been modified to become less time-consuming and hence cheaper. Here, too, various ingredients are added to the dough. The result is a bread that is different from the original German sourdough bread.

Almost 30 years ago, my brother Stefan studied how sourdough bread used to be made. He investigated various processes offered at the time, tried several of them, and found them wanting.

In the end, he developed a process on his own. To validate his ideas, he consulted our friend Dieter in Germany who in the 1950s and 1960s had been a journeyman baker in a traditional commercial bakery in a small town near Cologne. Therefore he knew old-style dough preparation and baking. Dieter confirmed that Stefan had developed the right method.

My brother then taught me that method. Over the years I have made some changes, and the methods differ now somewhat. But the basic ideas are the same.

This series of posts describes how to make sourdough bread. The posts tell you about the equipment you will need and the grains. They describe the preparation steps and the baking.

Following those steps, you will be able to create a large variety of sourdough breads and rolls, all in the German tradition. And all this with a few, rather simple steps.

Is our sourdough bread healthy and good for you? The next section shows that this indeed so.

Our Sourdough Breads are Healthy Food

1. The breads don’t use any added sugar and don’t contain any preservatives.

2. The breads contain plenty of fiber since they rely on whole grain flour, or even whole grain.

3. The breads contain less than 1.4 g of added salt per lb of baked bread. To put this in perspective: Thirty-five out of a total of 43 breads sold in the US have at least three times as much salt, according to the Global Bread Survey of 2018. In fact, the highest salt content of these breads was five times higher, and several popular brands were four times higher.

4. According to the Food Labeling Guide of the FDA, low-sodium bread cannot have more than 1.3 g of added salt per lb. So if you reduce the salt quantity in our recipes just a tad, indeed by 7%, you get low-sodium sourdough bread according to the FDA standard.

5. The breads are vegan sourdough breads, since there are just four ingredients: flour and grain, water, a bit of salt, and sourdough bacteria.

Way back when, baking with sourdough in Germany invariably involved rye flour. In fact, the sourdough baking process most likely was developed because rye bread baked without sourdough is hard like a brick and tastes awful.

By now, sourdough is used in Germany in combination with many different grains. Here, we use rye and wheat since they are readily available at reasonable cost.

Like many German customs — such as potato pancakes constituting entire meals, or sugar beet syrup being used instead of jam, or sauerkraut serving as the sole vegetable during long winters — the baking of sourdough rye bread used to be a sign of poverty. But now those customs are considered part of a German diet to be savored. Here are two stories explaining why sourdough rye bread is thought to be so valuable that it is even exported to exotic locations such as Hawaii, to be bought and consumed there by German tourists.

Two Stories about the Advantages of Sourdough Rye Bread 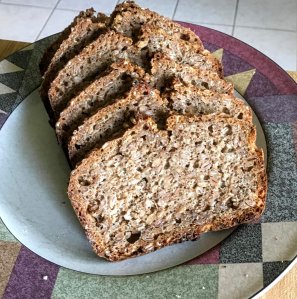 The first story: Anna was a long-time employee in my grandfather’s household in Siegburg, Germany, a small town in the Rhineland near Cologne, founded in the 12th century.

A woman with the kindest of hearts, she worked faithfully in the household from 1917 – 1954. During the later years. she was treated like a member of the family.

She had grown up in a poor farming family, eating daily a German sourdough bread called Schwarzbrot (literally, black bread). It was a sourdough rye bread with whole rye grain, and the bread of the poor folks. The middle and upper classes preferred the more expensive wheat bread.

The result was that the latter people would lose most of their teeth before age 50, while those poor folks, with their simple diet of Schwarzbrot, retained all or almost all their teeth until they died. Anna was no exception. She had her teeth until the time of her death in 1972, just short of her 81st birthday.

The second story: In the 1950s, a dentist moved from Northern Germany to Bavaria in the south. He noticed that his patients had a lot of tooth cavities. Investigating this, he realized that the people exclusively ate wheat bread. He knew about the beneficial effect of Schwarzbrot, which was popular in the region where he grew up.

He contacted the local baker and asked him to bake Schwarzbrot. The baker did not know how to do this, so the dentist collected the required information and instructed the baker. Thus, Schwarzbrot came to be on the shelves of the bakery.

The dentist told his patients about the beneficial effect of Schwarzbrot, now available at the local bakery. His patients added Schwarzbrot to their diet. As a result, they had fewer cavities. Needless to say, he became a popular dentist.

But, as the saying goes, no good deed shall go unpunished. The other dentists of the area, envious of the success of their innovative colleague, demanded that the association of dentists file a lawsuit, claiming that the dentist had engaged in illegal competition. The association indeed filed such a lawsuit.

The story made the national newspapers, and that’s how I became aware of it. The result: Uproarious laughter swept across Germany about this extraordinary stupidity. I never heard about the case again, so assume the lawsuit was withdrawn. 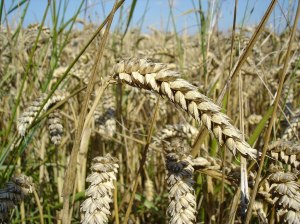 It is easy to bake bread with wheat flour. You start with the right amount of water, add yeast, some sugar, and the desired amount of salt, and gradually stir in wheat flour. When the stirring becomes too difficult, knead in the remaining flour.

Let the dough rise for 1-2 hours, then bake until done. During the baking process, the loaf expands significantly. This is called oven spring (German Ofensprung).

When you are done, you have a nice loaf of bread with crisp crust. The loaf is easy to slice, and the bread has a nice, slightly sweet taste. Unfortunately, that same bread caused the middle and upper classes of Germany to lose most of their teeth before age 50.

Suppose you duplicate this baking process using rye flour instead of wheat flour. The dough doesn’t rise as much. During the baking process, there will be hardly any oven spring. When you pull the loaf out of the oven, it looks and feels like a brick. You have great difficult slicing it, and it tastes awful. 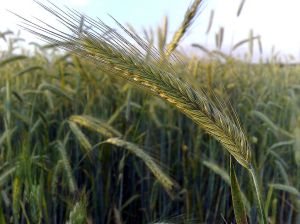 Before we analyze what goes wrong with such baking of rye bread, suppose you use the above baking process with wheat flour, but also want to use some rye flour. So you come up with compromise. You take a mixture of a small quantity of rye flour and lots of wheat flour.

Then the above baking process works, with two exceptions. When you slice the bread, it feels a bit spongy. And when you bite into a slice, there is a rubbery feel, and the bread has a strange taste. That’s how much of so-called rye bread is made in the US in commercial bakeries. For details, see Wikipedia “Rye bread.”

Why does the above process work with wheat flour, but not with rye flour? Here is a simple, indeed oversimplified explanation. Details are described in Wikipedia “Bread.”

Wheat naturally contains gluten that, when combined with water, becomes some sort of glue. The yeast, feeding on the carbohydrates in the flour and the added sugar, creates small gas bubbles. The glue contains the bubbles and prevents their escape. Thus, the dough expands and rises. In the oven, the high temperature heats the gas in the bubbles, causing additional, significant expansion. That results in the oven spring.

In past centuries, the ease of making bread from wheat, and the difficulties associated with rye, made wheat grain more valuable than rye grain. As a result, people with sufficient income opted for bread made from wheat flour, while the poor people — did what?

Well, they must have experimented for many years, probably centuries, without coming up with decent bread. Most likely, the insight came from a preparation process that had gone on too long according to the rules of the day, but turned out to result in tasty bread. That insight led to baking with sourdough.

The name “sourdough” is misleading. Then name is based on the superficial observation that sourdough tastes a bit sour. But the key feature of sourdough is not the slightly acidic taste, but the fact that the dough contains bacteria that feed on flour and in the process produce gluten as well as some acid and carbon dioxide gas.

So when a recipe says “add sourdough,” it really means “add a bit of dough with the desired bacteria.” There are several types of bacteria and thus several types of sourdough. In our work, we use the same sourdough for everything.

So let’s modify the above baking process for rye bread. We begin with water, a bit of salt, and a small amount of sourdough, called the starter. Then we stir in whole rye flour that is rather coarse, until we have a soupy mixture.

We let this stand for 18-24 hours. At that time, the bacteria have broken down the rye and produced gluten, and the mixture when stirred looks and acts like mud. The mixture bubbles a bit since carbon dioxide gas is continuously produced.

We now stir in commercially bought wheat flour, and when stirring is no longer possible, knead in wheat flour until a dough with the right stiffness result. The bacteria in the dough continue to produce carbon dioxide gas, causing the dough to rise significantly over the next two hours.

During the subsequent baking, the dough does the oven spring, and out comes a terrific sourdough rye-wheat bread. It has a nice structure and crust, and tastes very good. In Germany it is called Graubrot (literally, grey bread), since the large rye content produces a grey-brown appearance of the slices.

The process can be modified in several ways. By adding whole rye grain, we get the above mentioned Schwarzbrot.

All of this is made with sourdough, and never with yeast. Why no yeast? First, it is not needed, and second, it would add a slight sweetness to the bread that counteracts the pleasing sourdough taste.

A word of warning: If you usually cut off the crust from American store-bought white bread, or if you don’t eat the crust of pies or pizza, you surely will not like the crisp crust of the breads described here. So you may want to stop reading right here, since you will not like those breads.

But if you like crusts, or if you grew up with German bread, or if at one time you experienced German bread in the US and would like to bake such bread yourself, then you have come to the right place to get help.

Have any questions or feedback about this overview of baking sourdough bread? Please share your thoughts in the comments.