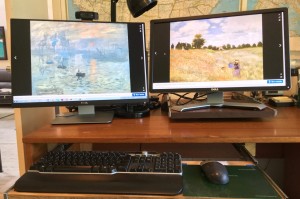 Two monitors hooked up to laptop

This post describes a simple solution that achieves the desired effect for the Dell Precision 7710 laptop.

Friend Mark, who is a very knowledgeable systems specialist, came up with the effective and easily implemented solution described below. The first external monitor is connected as usual, say at the HDMI out port of the laptop. For the second monitor, a special setup is needed.

The Dell Precision 7710 has three USB ports. Since we were already using all of them, we added a USB hub.

At this point, two external devices demanded the transfer of large amounts of data through the USB ports: the monitor adapter hooked up to the second monitor, and the external camera. We connected them directly to one USB port each. The USB hub then was attached at the third USB port, and all other devices, such as the external keyboard, were connected via the USB hub.

It is prudent to gradually install and test the new system.

In the first step, only the first monitor is hooked up to one of the monitor out ports, say to the HDMI out port.

Shut down the laptop, hook up the monitor adapter to one of the USB ports of the laptop, and connect the VGA output of the adapter to the second monitor.

Turn on the laptop. Go again to the “Adjust resolution” option of Display. You should see something like this. 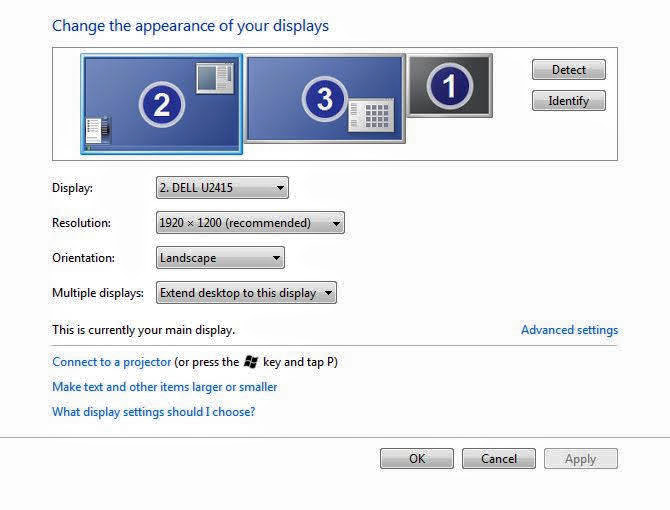 The model number of the second external monitor is not shown, but becomes visible when you click on the “Display” option. Make sure you do not change that option while doing so. The photo shows the correct choices for the options “Orientation” and “Multiple displays.”

If the monitors are shown in different horizontal order, you can drag them into the above configuration with the mouse.

It may well happen that you have already one monitor and want to complement it with another one. In that case, the new monitor should have a height that is not much different from that of the old one. On the other hand, the width can be significantly different without ill effect.

But there is a subtle test that you also need to do.

Though the new monitor may have more pixels, each pixel should have about the same size as for the old monitor. You can compute pixel size by dividing the vertical size of the monitor by the number of vertical pixels.

Compute this ratio for both monitors. If the two values do not reasonably match, then a window moved from one monitor to the other will change greatly in size, something you won’t like. So either do not buy the selected monitor, or simply buy two new ones and discard the old one.

In the above photo, the new monitor is on the left, and the old one on the right. The old monitor, a Dell P2314H, is not quite as tall, but pixel sizes of the monitors match quite well.

With monitors of different height, you have the option of having the tops or the bottoms of the two monitors line up. We prefer that the tops line up, as shown in the above picture of the “Display” option. For the opposite choice, use the mouse to drag monitor “3” downward so that the two bottoms line up.

Assignment of Monitors to Ports

A Word of Caution

You may be tempted to buy a so-called HD monitor, which has 1080 vertical pixels. These are really TV monitors that are claimed to work for computers. Friend Mark strongly advised not to buy such a monitor. They do not have the precision and display speed of computer monitors. Instead, spend more money and get something that really works.